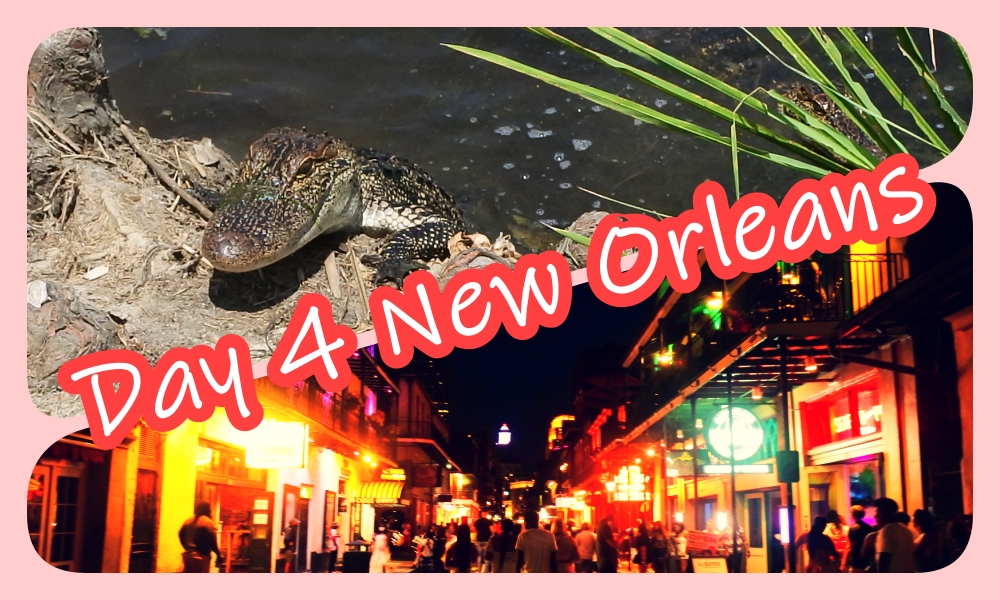 In August 2020, my husband and I came from San Antonio, Texas, to New Orleans, Louisiana ! This is the ep.4 of our road trip. Click here to read the Louisiana Travel-log from the beginning!

Last time, I was impressed at the old Capitol in Baton Rouge, it was really beautiful and we finally arrived at a hotel in New Orleans:

Today, we’ll drive to Lake Pontchartrain about one hour’s drive from New Orleans, and explore the French Quarter at night. We will also eat a really delicious Po-Boy!

Lake Pontchartrain, the second largest lake of salt water in the USA.

We just ate a crocodile and drank the remaining beer yesterday and didn’t think about breakfast today. We are going to cafe for breakfast.

I ate grits for the first time here and it’s quite delicious! Grits are like corn porridge. The flavor is pure corn. The grits I ate this time were plain and unflavored, and you will be relax with the gentle flavor. If you like ”polenta”, you’ll love it.

The bridge over the Lake Pontchartrain is super long!

Today’s main theme is the lake. Speaking of New Orleans, the area around the French Quarter is the highlight, but there is also a huge lake a short distance away. What’s more, is there a bridge? We are curious.

By the way, you saw this lake on your left before you entered New Orleans. Do you remember?

Insanely long. I can’t see the other side of the lake, as if it would last forever.

The lake is so huge that it looks like the sea.

That should be it. The bridge on Lake Pontchartrain is a Guinness-class bridge. Below is a Wiki quote.

In July 2011 the Jiaozhou Bay Bridge in China was named by Guinness World Records as the ‘longest bridge over water’.[4] At that time there was some controversy in the United States as supporters of the former holder of the record, the Lake Pontchartrain Causeway, disagreed with Guinness World Records not calling the causeway the longest.

the Lake Pontchartrain has a beach!

It takes about an hour to reach the lake. How much was the admission fee?

Here, the husband will meet what he has longed for…

Crocodiles!!! There are several crocodiles in the pond near the lake, and when people approach, they come to us to get food.

For the time being, feeding is illegal and there are notes, but it seems that everyone feed them. All the crocodiles here were small and their faces were a little cute. But if it gets too big, it’s dangerous and you’ll be caught. Fried crocodile we ate yesterday, that was … no way …

The back of this photo is the lake. There are many people, but everyone seems to be careful about social distance for each group.

It’s outdoors and it’s not overcrowded, so we were able to relax quite a bit. There were many dragonflies for some reason.

The good thing about this lake is that it has a beach. Perhaps military helicopters fly rarely, they are generally quiet. Is the water a hot spring??? It’s so warm and the sand is soft. It’s as wide as the ocean, but it doesn’t seem to be deep, and even if you go far from the shore, you’ll be able to reach your feet (I haven’t been there, but I’ve seen people like that).

Does it look delicious？ Yes, of course it was delicious.

Well, let’s go back to the French Quarter after relaxing at the lake.

Say goodbye to the impressive dieback tree and drive to the French Quarter.

The bridge on Lake Pontchartrain is said to be charged from one side (see wiki). We happened to return by a non-paying route because my husband wanted to take another path.

On the way back, we stopped by the supermarket and got today’s supper. Takeout food is delicious and fun, but I feel heavy every day. Overwhelmingly lacking vegetables and probably high in salt. But in the end, I buy alcohol and prosciutto (salt …) at the supermarket. The work is deep.

New Orleans nights, take a walk in the French Quarter

After returning to the hotel and taking a short break, we wandered around the French Quarter at night. This day is Saturday and we wanted to see the famous Bourbon Street!

Bourbon Street on Covid-19. It was a normal Saturday with no special events, but it became a pedestrian paradise.

I was surprised that people were selling marijuana as if they were selling hot dogs at a baseball stadium. Marijuana is legal in Louisiana, isn’t it? I don’t like the smell (it feels like baking moist tea leaves), but I got used to it during our stay…

Run away from people with snakes, beautiful neon lights, and hear music from somewhere. The photo is a very blurry orchestra.

A glowing bicycle troupe was passing fast on Canal Street.

We stayed in the French Quarter for three nights from Friday night, and Saturday night was the busiest even if there were no events. If you want to experience the hustle and bustle of the night, it is better to stay overnight on Saturday.

The gelato at night is the best

When we walked around, we found the lights of the store floated vaguely and seductively in the darkness of the night.

It’s a gelato shop!
Is it lucky or a trap to meet when we are tired of walking? This gelato shop seems to be a chain store that is expanding worldwide, and it seems that there are stores in Europe and the United States.

Next- Let’s visit some mansions in the Garden District!

As mentioned above, this evening we had salad and ham on the way back from Lake Pontchartrain, and raspberries for dessert. Sparkling wine that had been chilled in the refrigerator. I thought it would be convenient to stay for a few days if there was a simple kitchen.

Tomorrow, we will take a tram from the French Quarter to the Garden District to explore the mansion!